DOWNLOAD PDF OF THIS LESSON
Written by Aaron Meservey

2 sets of cards made out with the following title and number – preferably laminated so that you can easily use again without destroying them. You may need to produce more cards based on group size.

This is a big room or outside game, that generally takes playing once or twice before students fully understand how to play, but once it clicks, they have a blast.

Students are divided into two teams and each person is randomly given a card with a rank and number.

The result is a game of tag, where each team is trying to capture the other team’s general.

The twist to this game is that people can only capture those of a lower rank, except the general who can only be captured by the spy, who is otherwise the weakest character.

Example – If a corporal (3) tags a Lieutenant (5), the Lieutenant wins and escorts the other person back to jail.

If they are tied in their rank, neither one can capture the other.

When the person is tagged, each student shows their rank and whoever is the winner, escorts the other back to the prison.

Prisoners are freed when a teammate can enter the prison without being captured and tag them.

Prisoners must make their way back to their home base before being released to capture people again.

Prisoners do NOT get a free pass back, but can immediately be captured again.

If you have more than 20 students, it’s fine to create doubles of positions – however, make sure there is only one spy and only one general per team.

Students are allowed to talk with each other and tell what ranks their opponents are.

The game ends when the general is captured and escorted back to the base.

It was a lot of fun to be one of the high ranked people, wasn’t it?

When you’re a general or a brigadier you can run around and send almost everyone to jail.

When you’re a private, it’s a lot less exciting and you don’t feel nearly as useful to your team.

You largely try to survive and maybe free someone from jail.

Life can be similar. When you’re a “somebody” you can feel useful and powerful. When you’re not so successful, smart, athletic, or good-looking you may wonder if you’re useful at all or if you just need to try to stay out of everyone else’s way.

The world says you need to be on top to win, but the Bible tells a different story–God uses the weak to win.

As we read this scripture, I want you to try to answer the question, “Who is the Hero?”

Notes on text: You can insert this additional information while reading the text. It helps students understand and follow the story better. Optional Supplies – A tent peg and mallet would be helpful.

Verse 3 – Iron chariots were the biggest, baddest military equipment at this time.  It’s like having a tank in the Civil War – far superior to your enemies’ equipment.

Verse 8 – Deborah was not some female warrior.  She was most likely an older woman, but Barak wanted her for her spiritual authority.

Verse 17 – The Kenites were related to Moses’ father-in-law and had joined the Israelites. By separating himself, Heber was rejecting his ties to the Israelite community, including their God. He was a traitor, who left them to create a good relationship with their oppressors.

Verses 18-19 – It was through Jael’s non-threatening status:  a woman, non-Israelite, and of a household that was on Sisera’s side that allowed Sisera to be vulnerable.

Verse 21 – Giving the tent peg and mallet a few whacks, gives life to the story here.

Verse 5:31b – The result of this battle is that the land had rest for forty years. The idea of rest is used in Hebrews to point to God’s ultimate salvation from sin and death through Jesus’ finished work.

Ask:  Who’s the hero of the story?

Is it Deborah, the prophetess and righteous judge who gets everything going?

Is it Barak, the general who leads into battle and is mentioned in the “Hall of Faith” chapter (Hebrews 11)?

Is it Jael, who finishes off the opposing general and receives the glory according to Deborah’s prophecy?

[If group size allows, let the students discuss this.]

We are mistaken if we conclude anything other than that GOD is the hero.

Deborah’s righteousness was not enough.

Barak’s leadership and armies were not enough.

Jael’s boldness was not enough.

Each character was weak in their own way, to highlight who the real winner is.

The Lord’s victory was not dependent upon their merits, but on his power and commitment to his people.

Each person that God chose to lead had significant weaknesses.

Deborah, as an older lady, was unable to lead people into battle herself.

Barak’s faith was weak to the point that he put more trust in Deborah’s presence (as if she was a spiritual lucky charm) than on God’s revelation.

Jael was weak as an outsider and a woman.

Despite being led by a woman who had never seen battle, despite having a general who placed his faith in lucky charms rather than revelation, and despite the opposing general escaping to an ally, God won the victory.

God is different from the world because he uses weakness to win.

This is not an underdog story, where someone who is weak wins in spite of being weak.

No, God uses people, not in spite of weakness, but through their weakness.

Sisera (the general) would never have felt safe hiding in Jael’s tent if she were seen as strong or a threat.

Because she was weak, she could lay a trap for him.

Ultimately, this points us forward to God’s ultimate salvation for his people.

Not from an enemy of armies with chariots, but the enemies of sin and death.

God put on flesh and suffered and died for people.

Through his weakness, not in spite of it, God struck the deathblow to death.

In God’s kingdom, heroes are faithful over functional.

In our world, everyone is trying to climb the ladder of success to be a general.

We want to be big, powerful and successful, so we look to climb the ranks.

For some of us, it’s about becoming the starter on the basketball or football team.

For others, we want to be an awesome musician or be the smartest kid in the class.

For some, we try our hardest to increase our popularity so the cute guy or the cute girl will like us.

As you get older, you’ll want to climb the stairs to success to become wealthy and successful.

We take great pride in our function-ability to do a task.

You may even believe that God could use you more if you’re successful and respected.

In doing so, we are acting under the world’s system, assuming that it’s the Siseras-those of high status who are powerful that win the day.

But God uses the weak to win.

And so, even if you aren’t the athletic stud, the most brilliant student, the musical genius, or having any sense of popularity, God can use you if you’re faithful.

Even as He used Jael, a non-Israelite woman to win the battle, God can use you.

We are freed of the burden of having to be the perfect minister.

God doesn’t need you to be the smartest or most gifted person in the room, he wants you to be available to partake in the victory HE gives.

Example:  For many students, when thinking about sharing Jesus with their friends, the response is often, “I don’t have the all answers. I may not be able to answer their questions.”

This kind of thinking assumes that you have to be the general or brigadier rather than the spy.

The Holy Spirit is already working in the hearts of your friends and God can use you, even you, to minister to them because He wants the glory.

Because God is the hero, he can use the most unlikely of people.

Give a personal example of how God has used you in your weakness.

To think, “God can’t use me, because I’m just a middle schooler” does not recognize how God enjoys to use the unexpected.

We lose out when we place our trust in people.

Just as Barak missed his opportunity because he looked to Deborah’s presence as some lucky charm.

Israel was going to win because God said they would win, not because a great spiritual figure was there.

Even in the Christian world, we have a tendency toward hero-worship.

Examples: we want a pastor (you know, someone really close with God) to pray for us or only the guy who knows all the Bible stories can share Jesus.

We can’t boast about our part.

When we boast, we’ve missed the point that it’s God who is the hero.

Since God, is the true hero, we aren’t used because we’re so great, but because of our limitations.

Often this means we work in a team of others to do God’s work.

If you set your life to live for God, He will use you, even if you’re weak.

So if you feel like you have nothing to offer God, you’re in the perfect position to be used by him.

What situation was Israel in?

Who did God raise up to help them?

Who did she get to lead the armies?

Who killed the opposing general?

Why was that surprising?

What weaknesses do you have that have prevented you from believing God can use you?

React to the statement that “God uses the weak to win.”  Agree/disagree why?

Describe a time when you’ve hesitated to share Jesus because you worried you weren’t equipped enough?

How does this story speak to that?

Liked this lesson? The be sure to check out this junior high… 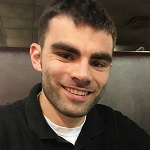 Aaron Meservey is the Pastor of Student Ministries at Elizabeth City Evangelical Methodist Church in North Carolina.  He’s married to a beautiful wife, Liz, and has two daughters: Eden and Chara.