Movies are the best way our culture knows how to tell stories.

Interestingly, we see in the Bible that Jesus often used stories in his teaching.

Use this fun game to help students discover that God writes the most amazing stories – our lives!

HOW TO PLAY THE GAME

This would be a good game to mix the age and gender so that each group has the best chance of a wide knowledge of different films.

Choose a two team captains that will be the final decision maker and official answerer for each team.

Each team will also choose a “scribe”.

This is the person who will write their official answers down, so they should have decent handwriting.

Have all the card stock cards displayed so that students can see the number, but not the movie titles.

SAY: Today, we’re going to test your knowledge of movies.

We have compiled a list of the highest domestic grossing movies of all time.

That means they made the most money of all films in the United States when selling tickets at the movie theater.

In the first round, teams will get two minutes to guess as many of the top 10 films as they can.

The Scribes are to write these down on the sheets of paper.

At the end of two minutes, leaders who have a copy of the master list will check what they wrote with the list and tell them how many they have correct.

Teams get 50 points for each correct answer they have from 1-10, if the other team did not list it.

If they have an answer that both teams have written down, they have to share the points.

So, each team gets 25 points for those answers.

For every movie title correctly guessed from the top 10, flip those cards around to show the movie title and gross domestic dollar amount.

In this round, teams pick the top five people on their team that they believe know the most movies.

Starting with the team with the lower amount of points, each team member gets 30 seconds to guess a title of one of the remaining top 25 films.

Get it right? 50 points for their team and the card is flipped around and revealed.

Get it wrong? That person is out.

Keep asking players until either three players are out or until you they have all five answered, whichever comes first.

Then, go to the other team and repeat the process.

If all the cards are revealed, add up the points and award the team with the most as your winner.

If there are still more cards left, proceed to round 3.

Teams now pick two people who will be good at acting out and getting their team to guess the titles of the remaining films.

If you have enough students, do not allow these two from each team to be the same as the five who were just playing or the scribe or the captain.

Now, the four actors will be shown one of the remaining titles, starting with the lowest ranking remaining one.

They will then have 60 seconds to act out, without talking or using any letters, numbers, sign language or sounds, and try to get their team to correctly guess the title before the other team does.

Have one leader judge each team.

Whoever is leading the game will watch the two leaders.

As their team guesses the title, have students raise their hands.

If one team guesses first, 50 points to them.

If both teams guess to close to call, then it’s a tie and each team gets 25 points.

If neither team guesses within the 60 seconds, reveal the card to both teams and no one gets any points.

Repeat this process until you have worked through all remaining cards.

Team with the most points wins.

If you have a tie, or want to offer a super bonus question with a ton of points, throw this one in.

Question: Which movie has the highest domestic gross of all time when you adjust for inflation?

SAY: Movies are the best way our culture knows how to tell stories.

Interestingly, we see in the Bible that Jesus often used stories in his teaching.

Let’s look at one today.

If you have time, ask a few students to help act out this story as you share it.

You might even go so far as to have them even act out the seeds growing.

So, at this point, the disciples – the people who spent the most time closest to Jesus – were a bit confused.

It’s kind of like when you see a movie trailer, but don’t really understand what the movie is going to be about.

So, they needed help.

There are a lot of stories that have been told through movies.

And, there are so many stories being told today, not just in movie theaters, but through song lyrics, television shows, and tons of original content online from Netflix and Hulu to YouTube and Vimeo.

However, we are most concerned with making sure people know the story of Jesus.

As we share it, like the farmer, we know that not everyone is going to hear it and start following Jesus.

However, we know that if we don’t share, some people won’t get the chance – just like the seeds couldn’t have grown unless they were planted.

So, the challenge is, how can you creatively be involved in sharing the greatest, true-story of all time – the story of Jesus?

Pray for your friends who are not Christians.

If all your friends are Christians, pray that God will help you make a new friend who is not one.

Then, look for opportunities to naturally talk about your faith.

Maybe even use the special events coming up to invite them to church.

Maybe you’ll be part of their life story when they tell others how they found out about Jesus.

Now that would be a movie I’d love to see! 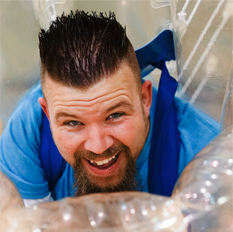 Written by Mike Sheley, who is the Middle School Pastor (5th-8th grade) at Mount Pleasant Christian Church in Greenwood, Indiana.

He’s been in full-time youth ministry over 17 years with most of that time focused on 5th-8th graders.