It includes a fun opening game, Prisoner’s Dilemma, that sets up the message.

Hope you enjoy the lesson!

P.S. – If you like this lesson be sure to check out the Spring Junior High Bundle, which includes 3 brand new junior high series at over a 50% discount.

Separate two volunteers into two separate rooms – from each other and the group.

Leader will explain the rules of the game to volunteers.

The leader has money to give out.

Each student must decide whether they will betray or cooperate.

If both students cooperate, each will receive $10.

If one student betrays and the other cooperates, the betrayer will receive $15.

If both students betray, they’ll both receive $5.

Make it clear to each student that they would make the most altogether if they cooperate.

However, regardless of whether the other person chooses (betray or cooperate), they will receive more by betraying the other.

If the other chooses cooperate, they’ll receive $15 rather than ten.

If the other chooses betray, they’ll receive $5 rather than nothing.

Give them a minute or two to decide.

Once they’ve decided, they will take the card that shows whether they are betraying or cooperating.

They will meet at the front and each will reveal what they have chosen.

Distribute the money as they’ve chosen.

Rather than be an upfront game with two people, you could try to have everyone play.

Have students pair up – or pair them up together.

Separate the “A’s” and “B’s” into different rooms where you will explain the rules of the game as above.

Using money would be too costly, so you could use candy.

Note – the low stakes of candy may not reveal the selfish impulse as well, but you’ll have more opportunities.

Have the different pairs meet up and reveal their choice.

While the object of the game is to reveal how we have a tendency to make selfish decisions, results aren’t guaranteed.

Because results are made public, there’s always a chance they would value being seen as cooperative more than the money.

Also, the relationship may matter more than the extra money/candy for some students.

Ask: What would you be willing to sacrifice to get ahead in life?

All of us have something that we fill in the blank with.

If I have money, then I’ll be happy.

If people respect me, I’ll be happy.

If I’m popular, then I’ll be happy.

If I find the right boyfriend/girlfriend, if my parents say they’re proud of me, if my name is in lights, if I’m adored by crowds, if I pass this class…I’ll be happy.

Tonight we’re going to ask – What fills your blank?

If what you fill the blank in with is really the thing you think will give you happiness, what are you NOT willing to sacrifice to get it?

When we make something (whatever it is) the key to our happiness, we have to fight to obtain it, we fear someone will take it, and we are angry when we lose it.

At all cost, we must get the thing we want.

We will manipulate, scheme, gossip, spread rumors, undermine in order to get what we want.

This reveals something about our hearts – we need to be transformed.

When we come to this portion of the life of Jacob, we find a man who is still willing to do whatever it takes to succeed.

In Scripture, we see that he obtained the birthright (a double share of the inheritance) from his brother for a bowl of soup.

When Isaac was old and his eyes were dim so that he could not see, he called Esau his older son and said to him, “My son”; and he answered, “Here I am.” He said, “Behold, I am old; I do not know the day of my death. Now then, take your weapons, your quiver and your bow, and go out to the field and hunt game for me, and prepare for me delicious food, such as I love, and bring it to me so that I may eat, that my soul may bless you before I die.”

Now Rebekah was listening when Isaac spoke to his son Esau. So when Esau went to the field to hunt for game and bring it, Rebekah said to her son Jacob, “I heard your father speak to your brother Esau, ‘Bring me game and prepare for me delicious food, that I may eat it and bless you before the LORD before I die.’

Now therefore, my son, obey my voice as I command you. Go to the flock and bring me two good young goats, so that I may prepare from them delicious food for your father, such as he loves. And you shall bring it to your father to eat, so that he may bless you before he dies.”

Whereas he got the birthright (wealth) in chapter 25, the blessing focuses on the power/authority.

The blessing gave Jacob control of the estate and he became the leader of the clan.

The birthright and the blessing generally went together as the extra wealth was meant to help the increased responsibility of the one in charge.

For example, if anyone in the family was down on their luck, it’d be the responsibility of the leader of the clan to support them.

Since they are in charge, it was their responsibility to divide the inheritance, so Esau could delay the giving out the inheritance to keep Jacob from receiving his portion.

Remember, back to what the Lord said about Esau and Jacob in 25:23 that “The older will serve the younger.”

Success was part of Jacob’s destiny but here he’s tempted to grab power for himself.

Jacob agrees with his mother’s plan.

He dresses up like Esau and lies to his suspicious father multiple times.

Then his father Isaac said to him, “Come near and kiss me, my son.” So he came near and kissed him. And Isaac smelled the smell of his garments and blessed him and said, “See, the smell of my son is as the smell of a field that the LORD has blessed! May God give you of the dew of heaven and of the fatness of the earth and plenty of grain and wine. Let peoples serve you, and nations bow down to you. Be lord over your brothers, and may your mother’s sons bow down to you. Cursed be everyone who curses you, and blessed be everyone who blesses you!”

Jacob did not trust God’s promise but sought to seize for himself…and he succeeded!

He got the blessing and leadership of the clan to be “lord over [his] brothers.”

Jacob, like us, doubts God’s Word, so he’s willing to sacrifice his closest relationships (dad and brother) in order to get what God would have given him anyway.

Jacob would make an excellent American.

He has a desire to have wealth and power and will do almost anything to get it.

Steal from his brother – check!

Lie to his father – check!

Pretend to be someone he’s not – check!

Because he doesn’t believe God’s promise, he believes the lie, “If I am going to succeed (and be happy), it’s all up to me.”

Yet every time we sin we believe the same lie as Jacob, “It’s up to me to grab happiness and I want it now.”

We are believing in some way that God is stingy not wanting to give to his children all he has said.

Of course Jacob’s story isn’t over as he now has to deal with the aftermath of his selfishness.

Now Esau hated Jacob because of the blessing with which his father had blessed him, and Esau said to himself, “The days of mourning for my father are approaching; then I will kill my brother Jacob.”

But the words of Esau her older son were told to Rebekah. So she sent and called Jacob her younger son and said to him, “Behold, your brother Esau comforts himself about you by planning to kill you. Now therefore, my son, obey my voice. Arise, flee to Laban my brother in Haran and stay with him a while, until your brother’s fury turns away–until your brother’s anger turns away from you, and he forgets what you have done to him. Then I will send and bring you from there. Why should I be bereft of you both in one day?”

In a twist of irony, Jacob has gotten what we wanted but has lost the happiness it was supposed to give him.

It’s the homebody who gets thrust out into the wilderness, while the wild man (Esau) can stay home.

The one who swindled to get the greater share of wealth ends up leaving all portions behind.

The one who cheated to get power/authority so feared the power of his brother that he had to flee.

While getting the blessing, he lost the blessed life.

How similar is this to our experience?

We try so hard to get whatever fills the blank and when we finally get it, we’re just as stressed, lost, and lonely as we ever were.

No matter how hard we try we make the same choices as Jacob.

We believe that God is stingy and so we need to provide happiness for ourselves.

We look to manipulate and control our circumstances, believing that we’ll be better off.

However, Jesus proves once and for all that God is not stingy with joy.

As Paul would later write, in Romans 8:32, “He who did not spare his own Son but gave him up for us all, how will he not also with him graciously give us all things?”

If God so loved us that he would give his only Son, why do we so often believe that He is holding out on us?

Have you ever lied or manipulated someone to get what you wanted?  How’d that go?

How does thinking of sin as doubting God’s promises change your perspective?

How does remembering God’s generosity in giving his son help overcome sin?

Liked this lesson? The be sure to check out the Spring Junior High Bundle: 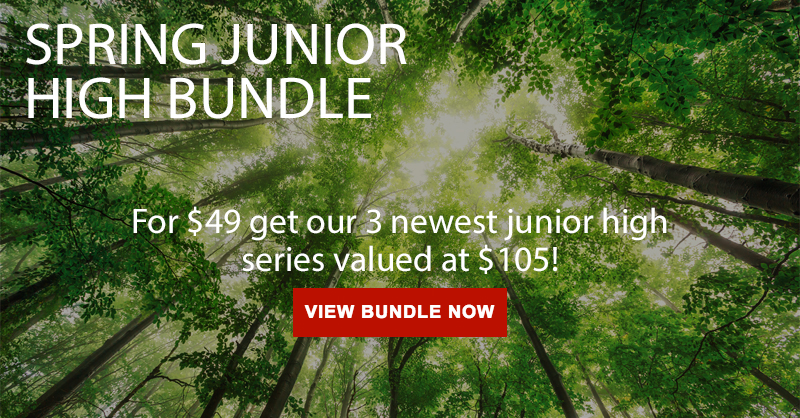