It’s that time of year again where as a nation we are consumed with brackets, underdogs, favorites, picks and numbers like 16, 8, 4 and 1. It’s a madness that runs from March through the beginning of April and, if we’re honest, distracts us from our normal daily routine more than anything else.

So, what if we could take advantage of this for our own games with students?

Enter the Bracket Maker app for the iPad. Here’s how the developers describe it:

This is a great portable program to help you create brackets for tournaments, friendly competition, small leagues, ping pong, bowling, volleyball, parties, curling round robins, scout derby races, tennis tournaments and more. It’s easy to use and it does the hard part of figuring out who goes where!

And here are some of the best and most important features:

1) Easy to advance the winners. Just touch the player to advance.
2) Pair the players using seedings or by random assignments or by manual assignment
3) Create tournaments for 4 to 32 players depending on tournament type.
4) You can enter scores.
5) Load previously saved tournaments
6) Email or print your bracket display
7) Add players from your contact list.
8) Edit/erase mistakes (even after the tournament starts).

Allow me to share with you how this app made life easier for us as at least one example of how you might use it yourself. We had a large number of students participate in a NERF Wars Night. They brought their own blasters or borrowed from our arsenal. We provided all the ammo (worth the cost to save the headache of trying to find it all). At check-in, they could sign up a team of 4-6 students to compete in a NERF battle tournament.

We had four playing areas we could use simultaneously, which would allow eight teams to compete at once. At each area, we had a tv with an HDMI input on a cart connected to an iPad using Apple’s Lightning Digital AV Adapter and an HDMI cable. This allowed us to display the iPad on the tv.

As you can see from the image above, that allowed students to figure out where they were playing and when by simple viewing the different tvs. It saved me and our volunteers from hearing: “When does our team play next?”, “Who do we play against?”, “Where do we play again?”, and “Who just won that game?” Of course, as you know, we still heard those questions. We simply answered by saying: “Check the tvs.”

Using the Bracket Maker iPad app,  we had a volunteer add teams as they registered. It’s a simple process with the app. Then, as teams won, a simple tap on the winning team’s name in the bracket advances them to the next round. We had adults refereeing each match. They let a high school/college student who was running the iPad know the winner to advance.

As a bonus, thanks to iOS’s Slide Over feature, we put a timer on the screen to act as a game clock. At-a-glance, players, fans and referees could see how much time was left. And when time was up, a loud alarm sounded through the tv to let everyone know the game was done. This was a major help for us.

Bracket Maker is simple to get up-and-running. However, there are lots of hidden gems and features that would be worth taking some time to learn before using it for a game night. Thankfully, the developer has a helpful website that includes testimonials, a picture gallery, tutorials and a forum with contact information.  I highly recommend checking these out to get started. The main features we used were displaying the brackets full screen and exporting the final bracket to photos to save an image of it.

Any time you have a tournament, this can be a lifesaver for you. If you have an Apple TV connected to a projector, you can even wirelessly project this onto a screen or projector using AirPlay. These can also be emailed or printed if you have a multi-week, ongoing tournament. You could use this for a competition between small groups or schools represented. You could also do this with individuals. It could also be used for decision-making. For example, you could be deciding on a color for a new youth ministry t-shirt. You start with eight options divided into pairings. Each week, students vote for their favorite. Those advance to the next round until you have a champ! The possibilities are limited only by your imagination.

The Bracket Maker app would be fun on its own. But you could also use it, especially during March, with a devotional or full lesson on 1 Samuel 16. The following is a simple guide for a devotional to go with any kind of tournament you are having.

Say: Probably most of us have had that experience where we have been with a group of friends, whether on the playground in elementary school or at the gym or local park with friends. It comes time to play a game with teams and the selection process begins. Most of the time, the most athletic people are picked first. And there are some students who almost always get picked last.

Unfortunately, that not only happens with games, but also in life. We tend to selfishly look around at people our age and choose friends based on who will like us or help us become more popular. If you are one of the popular kids, this is a great system. However, for those picked last, this can make life frustrating or absolutely miserable. And in reality, we are probably missing out on getting to know some amazing people because we make selections based on what we can see.

This happened with a man named Samuel in the Bible. God gave him instructions to go and anoint or select the next King of Israel. Listen to what his experience was like.

Say: Did you see what happened there? In verse 6, Samuel took one look at Eliab and thought he had to be the one God picked for King. We don’t know any specifics. But from God’s response, it must be because physically he looked like someone who would be picked first on the playground or at the park or gym. Check out verse 7, God’s response:

God looks inside the person to see who they really are, not just who they appear to be.

So Jesse sent seven of his sons past Samuel. Not one of them was the one God picked to be King.

Samuel asked Jesse if he had any more sons. Jesse mentions that he has one more, but that was David. David was out tending sheep! Jesse hadn’t even considered him.

So they wait. And when David arrives, he is in fact the one God has selected to be King! Everyone was probably shocked!

So here’s your challenge this week. In a tournament, we all want to have the best team and then want our team to advance to the championship and be the best of the best!

In life, we need to look at people from God’s perspective instead of our own. We need to start getting to know people for who they are, not just who they appear to be. Try this for a week and you might find yourself making some new friends and realizing that some amazing people have been nearby and you just didn’t notice them!

Liked this blog post? You’ll also enjoy this one… 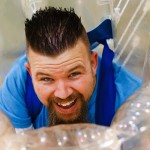 Mike Sheley is the Middle School Pastor at Mount Pleasant Christian Church in Greenwood, Indiana, where he oversees their ministries for 5th-8th graders.  He’s been in full-time youth ministry over 16 years with most of that time focused on preteens and junior highers.